END_OF_DOCUMENT_TOKEN_TO_BE_REPLACED

Let’s Get Lost
by Adi
Alsaid
Release Date: 07/29/14
Harlequin Teen
Summary from Goodreads:
Five strangers.
Countless adventures. One epic way to get lost.Four teens across the country have only one thing in common: a girl named LEILA.
She crashes into their lives in her absurdly red car at the moment they need
someone the most.There’s HUDSON, a small-town mechanic who is willing to throw away his dreams
for true love. And BREE, a runaway who seizes every Tuesday—and a few stolen
goods along the way. ELLIOT believes in happy endings…until his own life goes
off-script. And SONIA worries that when she lost her boyfriend, she also lost
the ability to love.Hudson, Bree, Elliot and Sonia find a friend in Leila. And when Leila leaves
them, their lives are forever changed. But it is during Leila’s own 4,268-mile
journey that she discovers the most important truth— sometimes, what you need
most is right where you started. And maybe the only way to find what you’re
looking for is to get lost along the way.

“This will likely be a popular summer
hit, especially for older teen about to embark on their own journeys of
self-discovery.” –Booklist

In the few years since I began reading young adult novels, I’ve taken a shotgun-blast approach when choosing what to read next. Rather than focusing on one author’s work to fully explore, I’ve tried to get my hands on as many different ones as possible. So, though I’ve only read one or two books by some of these authors, they wrote the books I most enjoyed within the genre, and am looking forward to reading more and more of their work. Three of them I only discovered this year while traveling to book conferences, and all three of their books (Whaley’s Noggin, Lockhart’s We Were Liars, and fellow debut author Leslye Walton’s The Strange and Beautiful Sorrows of Ava Lavender) are among my favorite books overall that I’ve read in the past couple years.

My Top 5 YA Authors 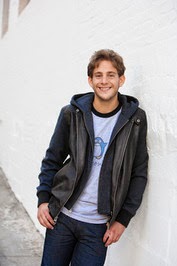 Adi Alsaid was born and raised in Mexico City, then studied at the
University of Nevada, Las Vegas. While in class, he mostly read fiction and
continuously failed to fill out crossword puzzles, so it’s no surprise that
after graduating, he did not go into business world but rather packed up his
apartment into his car and escaped to the California coastline to become a
writer. He’s now back in his hometown, where he writes, coaches high school and
elementary basketball, and has perfected the art of making every dish he eats
or cooks as spicy as possible. In addition to Mexico, he’s lived in Tel Aviv,
Las Vegas, and Monterey, California. A tingly feeling in his feet tells him
more places will eventually be added to the list. Let’s Get Lost is his YA
debut.  Let’s Get Lost Website!
Author Links: