Interview with Fire of the Sea author Lyndsay Johnson! 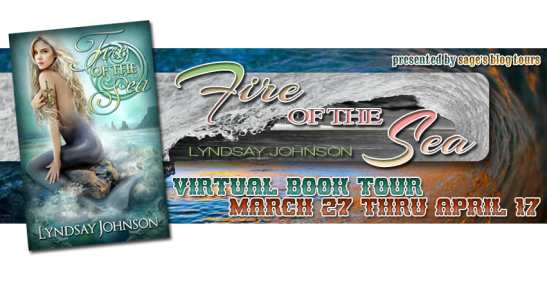 Fire of the SeaBy Lyndsay JohnsonPublished: March 24, 2014Publisher: 48fourteen PublishingPages: 379
Sharp, sleek, and golden. Like the dagger she has worn since childhood, eighteen-year-old Aeva is all three of these things. But there is something else that this mermaid and her prized weapon share – they are both hunted.Hidden within the caves off Iceland’s dark shore, Aeva waits to take her place as the next ruler of the Meriads. But when Aeva uses her potent and alluring song to save a drowning human, she disrupts a delicate balance. Realizing she has unexpectedly bound herself to Gunnar, Aeva is torn between duty and love.Aeva severs one life to begin another, and soon finds herself not only rejected by the sea, but also stalked by an old enemy. As the worlds of myth and man intertwine, Aeva will challenge fate to protect her own sacred relic and the man she loves.But legends and lies cast an intricate net. With time and safety quickly unraveling for Aeva and Gunnar, there is only one clear course: Find and defeat Delphine before she can shift again.

About the Author:Lyndsay grew up in the wide expanses of Texas, where the only thing stronger than the accents was the state pride. An over-active imagination, tale-telling father, and encouraging librarian mother lead to her love of all things creative.When it comes to books on her bedside table, young adult lit has always been a favorite (Blue Balliett, Libba Bray, and Stephenie Meyer, to name a few.) But it was actually an old, yellowing copy of Scandinavian Folk and Fairy Tales that planted a particularly relentless seed. Shapeshifters and sea nymphs began forming the seed of an idea that would eventually grow into Lyndsay’s debut novel, Fire of the Sea.When she is not writing, you can find Lyndsay spending time with her family in the Rocky Mountains of Utah. She enjoys sitting in dark theaters, trying new gluten-free recipes, watching breaking storms over the peaks out her window, and secret naps.

Now for my interview with the author!

1.) Your book is jam-packed with mythology. How much of that is adapted from existing legend and how much did you invent yourself? What was it like melding them together?

The mythology in Fire of the Sea is so intertwined, that it might be hard to pull it apart and distinguish between existing myth, and my own spin on things. I drew on Norse and Greek mythology, as well as Scandinavian folklore and the Icelandic Sagas (and other Norse texts). There are so many small details that are inspired by those sources. It took me over a year of researching myths and legends, before the story started to take shape. But I took it a step further by creating new connections between the Greek and Norse gods. It was fun to create my own class of mermaids, as well. I enjoyed finding ways to make them seem like they could actually exist (they are marine mammals, for example, and their skin functions a lot like a wetsuit).

2.) Iceland is a fantastic, unusual setting. Have you been there yourself? What was the setting research like? Any interesting facts that didn’t make it into the book?

I actually have never been to Iceland. But my husband (a filmmaker and photographer) is passionate about Scandinavia and especially Iceland. He shoots there multiple times a year, and comes home with amazing stories about the people and culture. The photos always blow me away. When I was trying to create a new world for mermaids that hadn’t been done before, Iceland jumped out as the perfect wild and wonderful setting for the story. Iceland is just being born compared to the rest of the Earth. So to have Aeva’s first encounter with the Earth as a human happen in Iceland really worked for me.

With three small children, international travel isn’t always feasible for me at this stage in my life. But setting the story in Iceland gave me a great excuse to do all kinds of research and experience the landscape—even if it was only virtually. Scandinavian culture is something we focus on a lot in our home (my husband’s side of the family has Danish heritage). It was very much a team effort between the two of us when it came to the research side of things. And I was able to learn so much more about a place that is so important to him.

My husband was able to actually shoot the footage for the trailer while on business in Iceland, so be sure to check that out, as well.

I have a whole file of notes on my computer that didn’t make it into the story. But that just means I’ll have a few more surprises up my sleeve if I decide to write a sequel!

3.) What was it about this story that made you want to write it? What is the “heart” of your story?

I had a dream that I was a mermaid. I had rescued a pilot who had fallen from his plane (he was being dragged under by his parachute). I was swimming through all of this billowing, white fabric. It was amazing. I woke up and had to type a rough draft of what would eventually become the second chapter in my book. So that was the initial inspiration for Fire of the Sea. But as I started to develop the idea more, I was so excited to write mermaids in a new way. I think the heart of my story revolves around fate and choice, and how the two intertwine. It isn’t easy or clear to choose our paths as teenagers. And I wanted to write a story that explored the idea of making decisions based on the heart and true passion and drive, rather than based on outer expectations.

4.) Would you be a mermaid if given the chance? What do you think it is that makes mermaid stories so compelling and enduring?

I think it would be fun to have the option to be a mermaid. I like the idea of going between land and sea. But I wouldn’t be lying if I said I had never pretended to be a mermaid while swimming in the ocean.

I feel like mermaid stories are so compelling because the world is so close to our own. It feels just out of reach, yet possible on some level. What’s to say they don’t exist? I guarantee each one of us has stared down into the depths of the sea and wondered—almost willed—a mermaid tail to appear. The bridge between our world and that of the ocean has always fascinated mankind. And it’s wonderful to escape into this hidden world.

5.) What draws you to the fantasy genre?

Fantasy lights a fire in me. I love being able to access the feelings I had as a girl when I read or write fantasy: wonder, delight, magic, mystery, suspense, the impossible made possible. I am also especially drawn to fantasy that is somehow rooted in reality. The idea of something enchanting, terrifying, or fantastical being just out of sight really appeals to me.

6.) What are you influences (books or non-books)? What books have made an impact on you and/or your writing?

I draw inspiration from many things—my dreams especially. I also try to observe the way my children interact with the world, the conversations between friends or lovers. Some of my favorite books and series include The Gemma Doyle Trilogy by Libba Bray, anything written by Suzanne Collins or Blue Balliett, The Historian by Elizabeth Kostova, Life of Pi by Yann Martel, and of course the Harry Potter series. I also like browsing through Scandinavian folk and fairy tales when I have a spare moment.

7.) Tell us a bit about your journey to publication.

I knew from the moment I started writing Fire of the Sea that this wasn’t a hobby. I had to publish this book. Of course it wasn’t an easy goal. I spent more than three years researching, writing, seeking representation, then ultimately going with an independent publisher. I searched for an agent for about a year. It was grueling, and I learned a lot about myself as a writer. I revised my manuscript more times than I can count. And I had a few close calls! There were agents who showed real interest. But I also received an offer from 48fourteen that just felt right for me at this stage. I like to call it my “Goldilocks” experience. Self-publishing felt too small. An agent and large publishing house started to feel too big. But an indie publisher that offered eBooks and print options felt just right—especially for a debut novel. (To read more about this, I have written a few posts on my author site www.lyndsayjohnsonwrites.com detailing the entire process from conception to publication.)

8.) Any advice for aspiring writers?

Well, I still kind of think of myself as an aspiring writer. Ha! I think the best thing I could say is to take risks when it comes to creativity. Do something that scares you a little (or a lot), and see how it changes your world!