Review: The Sea of Monsters (Percy Jackson & The Olympians #2) 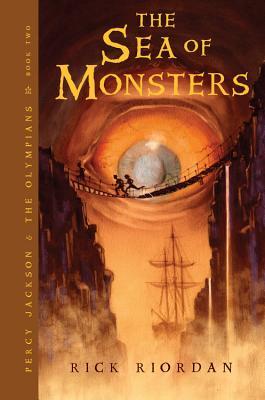 The Sea of Monsters

Series: Percy Jackson and the Olympians #2

Percy Jackson’s seventh-grade year has been surprisingly quiet. Not a single monster has set foot on his New York prep-school campus. But when an innocent game of dodgeball among Percy and his classmates turns into a death match against an ugly gang of cannibal giants, things get . . . well, ugly. And the unexpected arrival of Percy’s friend Annabeth brings more bad news: the magical borders that protect Camp Half-Blood have been poisoned by a mysterious enemy, and unless a cure is found, the only safe haven for demigods will be destroyed.

In this fresh, funny, and hugely anticipated follow up to The Lightning Thief, Percy and his friends must journey into the Sea of Monsters to save their beloved camp. But first, Percy will discover a stunning new secret about his family—one that makes him question whether being claimed as Poseidon’s son is an honor or simply a cruel joke.

This book was so much fun. I get worried when I see a sequel is shorter than a first in a series. I think I associate it with the book being hastily produced or otherwise rushed (I probably have this issue because Harry Potter 5 is my all-time favorite and then HP6 came out and was way too short and felt rushed. I think it gave me a complex or something.)

Anyway. This book cured me of said complex. It didn’t need to be longer. A lot happens. A lot happens that doesn’t necessarily seem to be advancing the overall plot thread of the series, but this is only because we can’t see the whole picture. When we do…wow.

Percy and his friends actually go to the Sea of Monsters (which, like all ancient Greek stuff, has relocated to the reigning Western power, America, and so is now located – where else? – in the Bermuda Triangle), dwelling place of all those fun people like Circe, the sirens, and man – or satyr – eating cyclopses. And speaking of cyclops, I just love Tyson. He is the best.

We get to meet more Gods, which is always fun. Being such a fan of mythology as I am, it’s awesome to always be wondering who is going to pop up next, and still often end up surprised because there is just SO much material for the author to work with. And even when I can guess where things are headed, well…it’s still fun because then I feel clever. 🙂

There were some very emotional moments that I wasn’t expected, but was pleasantly surprised. We see farther into Annabeth’s character and she really comes into her own, as her own hero, bot Percy’s sidekick. Even Grover really grows, and though he doesn’t believe it himself, he is MUCH more than Percy’s sidekick. Even mean-girl Ares camper Clarisse is humanized.

We also learn that monsters are responsible for chain restaurants. What more could you ask for?

Oh, and p.s. from my inner 9-year-old self: OMG FISH PONIES!