Review: The Sea Inside by Vickie Johnstone 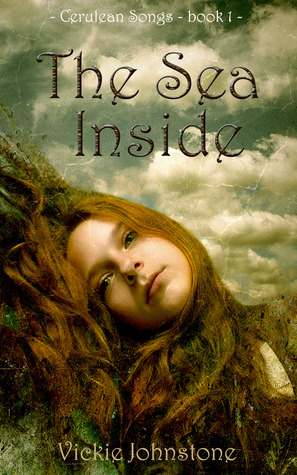 Book 1 in the Cerulean Songs series. Time is all we have; it flows – it cannot stop. Jayne wakes up in the hospital following a terrible accident to find herself paralysed below the waist. While struggling to recover, she is offered a gift that opens a portal to another world. To the girl’s astonishment, she finds herself on a journey, on both the physical and mental plane. It brings her to the mystical realm of Entyre, where life is very different and power lies with the creatures of the deep. Her adventures bring her face to face with a terrifying witch, a cheeky insect and the most beautiful of mystical creatures – a unicorn. While the threads of time keep flowing, Jayne must decide what is real, who to trust, and regain her inner strength in order to find herself and her true destiny.

Nickie Storey, author of the ‘Grimsley Hollow’ series: “A delicious brew of invention, enchantment and refreshing characters, Vickie Johnstone has a firm grasp on the fantasy genre. I can’t wait to read more of her work!”

Greta Burroughs, author of the ‘Wee People’ series: “Strange worlds, interesting characters, suspense and a surprise ending – what more can you ask for? This book has it all and more.”

Jennifer Thomas: “A gripping and fascinating mythical adventure that is beautifully described. There is suspense, fear and emotion throughout the entire novel that makes you want to keep turning the page.”

A big thank you to Maja Drazic for the beautiful cover photograph.

I was excited to read this book. The cover is gorgeous (I’d seen the image on deviantART before I even knew the book existed), I love fantasy and I know what it’s like to be paralyzed. So when I won a copy I read it as soon as it arrived.

The author completely nailed what it’s like to be in the hospital following a catastrophic injury. Jayne felt lost, alone, detached, confused. It was like I was reliving my own experience it was so accurate. Jayne is given  a chance to escape her tragic situation, to walk again and be whole, by a strange woman who gives her a crystal. The crystal transports Jayne to the underwater city of Entyre.

Jayne concentrated on getting better. The dark mood that she had found herself in grew steadily lighter and she pushed her memories of the blue city to the back of her mind, dismissing them as dreams, which would gradually fade with time.

That was her hope, for while she slept her mind wove images of the sea, accompanied by the echo of the whales and a tall man whose hair was the colour of the darkest waves.

He was always there, not far away it seemed, thus was the lucidity of her sleeping life.

The author employs a unique, highly effective narration strategy when switching between Jayne’s time in Entyre and in our own world. When in Entye, the story is told in first person, and when in our own world, it is told in third. To me, this reflects Jayne’s feelings that perhaps the injury has happened to someone else, and she is just a spectator. It also gives her added agency when her body and health are restored in Entyre. It reminded me of the switch between color and black-and-white in The Wizard of Oz.

Jayne falls in love and finds a new home in Entyre, and though the city is fascinating and described beautifully, I really needed more. When Jayne first arrives in Entyre, she is nearly killed by mysterious invisible creatures who live in the sand. We learn that there was a devastating war involving these creatures – but that’s it. We also don’t learn enough about how the crystal works or why, or what the connection between Entyre and our world is. I wanted more of the mythology of Entrye, more of how people lived there (though at least we did see some of that). I also would have appreciated more of a build-up of the romance. It wasn’t insta-love, but it was rather too subtle. I wanted to know what they liked about each other, what they did together. We never really get to see them together as a couple. They kiss once, then two weeks pass, then Jayne is yanked back into our world.

I did enjoy the kind of inverse of the traditional hero’s journey that occurs in the second half of the book. Instead of (let’s use The Wizard of Oz as an example again), the heroine spending all her time trying to get home to the regular world, Jayne discovers that Entyre is her true home, and must fight heroically to return to it.

How could I have doubted myself even once? It was never a dream.

This second half unfolds in decidedly Narnian fashion – things don’t necessarily make sense, but they keep you on your toes. I’m the type of reader who wants to know the reasons behind a flying unicorn, how it got there, why, etc., but that doesn’t mean I can’t appreciate the flying unicorn at all. (Yes, there is actually a flying unicorn – also, at one point our heroine is carted off by actual plot bunnies). This isn’t necessarily a bad thing, it just isn’t my preferred method of plot development. It was unique and interesting, but events felt like they came out of nowhere and I really wanted more structure.

The writing itself suffered from a few issues. First, I felt it was rather too formal for a modern British teen. It didn’t sound natural and made Jayne harder to connect with at times. There were also minor descriptive issues, such as Jayne repeatedly describing her own red hair flying in the wind, and the way she almost always had to “glance around” before she could describe something. It made Jayne’s narrative awkward at times.

I’ll give an example. First, I’m reading this scene, which leaves me breathless with its poignancy:

“You know they speak to one another.”

“They do. If you listen, you can hear the rustling of the leaves. They open like hands, don’t you think? I imagine them as hands, but they speak. I am sure of it.”

But then I keep reading and on the next page it says:

“So, here I was in a forest of blue and it seemed normal and I was on an adventure.”

and then I’m frustrated because I wish she would describe something, anything else instead of repeatedly describing things that are obvious.

I did enjoy the ending. I liked the fact that a fall (Jayne’s accident) began the story, and she had to fall again to reach Entyre once more. The allusions to The Little Mermaid were brilliant. Once of my favorite aspects of the Hans Christian Anderson version is the pain the mermaid experienced in her feet when she tried to walk. This theme, and the parallels between mermaids and paralysis in general were beautifully done. The theme of time was also thoughtful and interesting. All in all, I enjoyed this book, and I just hope that the next installment goes deeper into the mythology of Entrye and explains things more clearly.